Kick off your Bhutan trip in the capital city, Thimphu. Your day will start by visiting the serene Buddha Dordenma, which is a massive Shakyamuni Buddha statue in the mountains. The status is considered auspicious as it fulfilled one of the two major prophecies by the revered yogi Sonam Zangpo.

Not too far away is Thimphu Chorten, which is considered to have been designed in a way that makes it ‘one of the most visible landmarks’ in Bhutan. Essentially a stupa, it is decorated with vibrantly carved annexes and is a crucial religious spot in Thimphu.

You can end your day at the famous Changangkha  Lhakhang, which is one of the oldest monasteries in Bhutan. Established in the 12th century, this is a place tailor-made for peace seekers.

On your third day, you’ll move on to the quaint yet fascinating city of Paro. Situated by the Paro Chhu, the city oscillates between embracing the new ways and holding on to its deeply cultural roots. Start your day by paying a visit to the Rinpung Dzong, which is a monastery as well as a fortress. Situated by the Paro river, it is famous for a beautiful bridge that runs over Paro river itself.

Later in the day, you can take a stroll along the Paro river and get to know the locals.

On your last day, you can enjoy the views that Paro valley has to offer and visit the Taktsang Monastery which is surreal and also known as the Tiger’s nest due to its cliffside location in the Paro valley. The view from this monastery is breathtaking and the cloud cover makes for a dreamlike setting. You can relax here and reflect back on your wonderful trip of Bhutan.

About 70 kms from Thimphu, lies Haa valley, a place too magical to be true! Don’t forget to visit the famous Black temple and White temple that date back to 7th century. The Torsa Strict Nature Reserve here, has no human inhabitants. You can relax and prepare yourselves to face the prospect of leaving Bhutan with unforgettable memories. 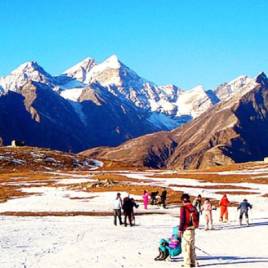